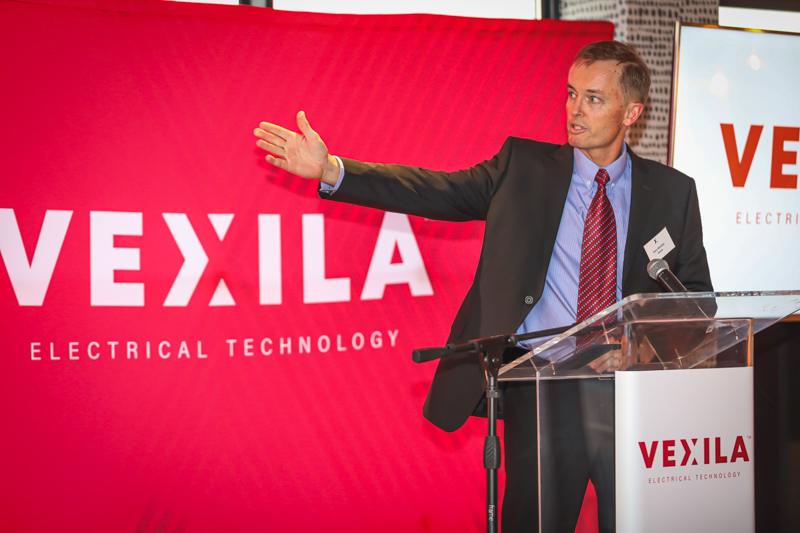 Composite insulators and related products manufacturer Pfisterer has completed its rebranding initiative and is now known as Vexila.

The rebranding follows after Pfisterer, which was solely owned by the German group Pfisterer, decided to exit the South African market owing to a strategic imperative to exit the distribution space in which the company operates, and their “unwillingness to transform the business locally”, Vexila CEO Gary Whalley tells Engineering News Online.

Once it entered the market, Thesele thought to reposition the business and set it up as a “leading manufacturer” of electrical products, using the position in South Africa to expand the business into Africa.

“In separating from Pfisterer, [Thesele] then moved into a unique space [during which the company had] a limited duration in trade under the name Pfisterer, and the agreement entitled us to rebrand [the company], but retain a relationship with Pfisterer,” Whalley elaborates.

Thesele thought it best to reposition the business from the point of view of making it independent, which is the prime driver for the rebranding exercise.

The rebranding follows 12 months after the acquisition.

The new brand represents the company’s commitment to continue delivering a service to its customers, with sustainably innovative products at its disposal.

The primarily business-to-business-focussed manufacturer’s products are used in electrical infrastructure, which Whalley explains is “basically supplying a product that [is used when] building highways and roadways, bringing power to areas where people will consume it”.

Vexila operates primarily out of the Pietermaritzburg area, where it employs 350 permanent employs. This number used to be 600, when the company still supplied State-owned Eskom with a large number of products.

However, owing to the distress in the sector and the fallout from the power utility’s financial struggles, the number of employees has been reduced dramatically.

Until Eskom changes its buying patterns locally, Whalley tells Engineering News Online, the company will not expand its local footprint. This, however, is not deterring the company from expanding to the rest of the continent – namely in sub-Saharan Africa, East Africa and West Africa.

Vexila currently exports its products to the US, Europe, Australia and other parts of Africa, where Ghana is the company’s premier market.

“Over the past 40 years, we have grown into one of the largest manufacturers of composite insulators and line hardware on the African continent with the most complete product offering in the market,” Whalley comments.

He adds that the company’s focus is on supplying future-ready power grid products and solutions, tailored to drive robust economic growth that will enhance the quality of life for generations to come.

Additionally, with global energy requirements growing at an accelerated speed, Vexila’s electrical technology solutions are designed to offer a reliable, environment-friendly transmission of power, which includes sources such as solar, hydroelectric and wind.

“We’re really excited by the opportunity as an African business to be fully-South African owned, and proudly so, and [we’re] looking forward to leading the way into export markets as well as South Africa,” Whalley enthuses.